The Old vs. New Covenants. 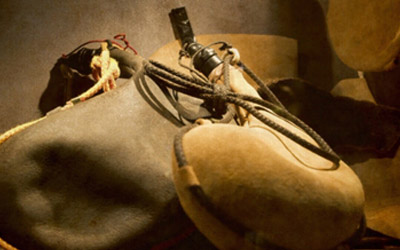 Matthew 9:14-17
14Then John’s disciples came to Jesus and asked, “Why do we and the Pharisees fast often, but your disciples don’t fast?” 15Jesus said to them, “The wedding guests cannot mourn while the bridegroom is with them, can they? But the days are coming when the bridegroom will be taken from them, and then they will fast. 16No one sews a patch of unshrunk cloth on an old garment, because the patch will pull away from the garment and the tear will be worse. 17And no one pours new wine into old wineskins; otherwise the skins burst and the wine is spilled out and the skins are destroyed. Instead they put new wine into new wineskins and both are preserved.

In this passage, the John character is John the Baptist, who baptized Jesus in Chapter 3. Because John the Baptist was a religious leader at the time, he may have had some disciples of his own. They come to Jesus to ask why his disciples do not observe the observances required of Pharisees. In this case, the observance is fasting.

In verse 15, Jesus provides an enigmatic response. They’re probably unaware that the bridegroom Jesus refers to is himself. What about the wedding he’s coming to? Why would he be removed from the wedding party? I believe the wedding represents Jesus’ prophecy of the Wedding of the Lamb of God when he returns to bring the church into his kingdom, and the day he is taken away is the day he is crucified.

The goal of the prophecy, particularly the one concerning Jesus, is to ensure that when it is fulfilled, it is undeniably God’s predetermined plan. He foretold of the future day of rejoicing at the Wedding of the Lamb of God, but he also foretold of what he would have to endure on the cross before that joyful day. What about the patch and the old garment, as well as the wine and the old wineskin? I believe it is a prophecy for us.

THE PROPHECY FOR BELIEVERS

a. The old garment

What does the term “old garment” mean in the passage? A garment, or robe, is typically used to express the wearer’s concept of righteousness or salvation. For instance, consider the following Isaiah 61:10 verse:

*“I will greatly rejoice in the LORD; I will be overjoyed because of my God. For he clothes me in garments of deliverance; he puts on me a robe symbolizing vindication. I look like a bridegroom when he wears a turban as a priest would; I look like a bride when she puts on her jewelry.” (Isaiah 61:10) *

Could Jesus’ prophecy be the same words he spoke through the prophet Isaiah’s lips a long time ago? Aren’t they strikingly similar?

*“8What is more, I consider everything a loss because of the surpassing worth of knowing Christ Jesus my Lord, for whose sake I have lost all things. I consider them garbage, that I may gain Christ 9and be found in him, not having a righteousness of my own that comes from the law, but that which is through faith in a Christ—the righteousness that comes from God on the basis of
faith.” (Philippians 3:8-9) *

When the Israelites were still in exile in Babylon in the sixth century BC, the Pharisees instituted a legal system to help them avoid sin against God when they returned to their homeland. They were exiled because of their violations of Moses’ law, which included the Ten Commandments. The Pharisaical law exists because the people are unable to obey Moses’ law. They might have a better chance with Pharasaical law.

Because the righteousness that comes from the Pharisees’ law is only a “old garment” with many gaps or holes, they look forward to the arrival of the Messiah, who they believe will provide “patches” to make them whole.

When Jesus arrived, he told them that such patching was impossible because the “patches” would tear apart their incomplete “old garment.” What exactly are these “patches?” They are things that they hope will cover what is lacking in their righteousness as a result of the law, which is their “old garment.” The truth is that Jesus will not bring patches, but only a complete white robe of righteousness.

The “wineskin” represents the believers, but what does “old” mean? It is the same as stated above, that they are the works required by law. The “old wineskin” is the person who still relies on the works of the law to obtain God’s righteousness, but in reality, they can only obtain their own righteousness through the law.

What about the so-called “new wineskin?” It is the individual who receives salvation through grace and faith apart from the works of the law. I hope you can tell the difference between God’s righteousness and someone’s own righteousness, which means through their own eyes.

The gospel of peace is what God gives to those who come to receive salvation and righteousness through faith in Jesus’ death on the cross for their sins. However, Jesus warns them sternly that those who still rely on the works of the law will be unable to receive this new wine because it will cause their “old wineskin to burst” and “the wine spilled out.”

What if the old wineskin ruptures and the wine spills? What if a person comes to faith under the New Covenant but continues to rely on the works of the law? I won’t say anything about what might happen to the person’s salvation, but if there is anything I want them to carefully consider, I will suggest the following two Bible verses:

*“I do not set aside the grace of God, for if righteousness could be gained through the law, Christ died for nothing!” (Galatians 2:21) *

*“You who are trying to be justified by the law have been alienated from Christ; you have fallen away from grace.” (Galatians 5:4) *

As a result, we must renew our minds and carefully consider whether we are the “new wineskin” that is receiving the “wine” of the gospel that teaches a faith that is by grace only to be assured that we are wearing the “new garment” of a righteousness that “comes from God on the basis of faith (Philippians 3:9),” lest on that day we discover the robe we’re wearing is of our own righteousness, it will be too late. Do you recall Matthew 22’s Parable of the Wedding Feast? 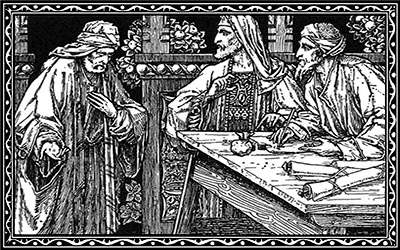 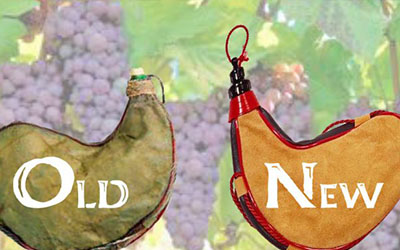 The Old and the New